I was trimming a VW T6 campervan last week whilst listening to the radio, when ‘Vincent’ by Don McLean came on. It starts with the words “Starry starry night” and that seemed very apt, given the fact that the van had just received a Starlight ceiling.

You may remember a few months ago we posted on Instagram our first Bentley-style Starlight ceiling.

It all came about when a new customer said how much they liked the roof lining of a Bentley they’d seen, where hundreds of fibre optic lights sparkled above the head of those sitting in the back.

Never one to ignore a challenge, Colin immediately promised the customer that if Bentley could do it, so can we and he then set about working out how to achieve it.

Over the next few weeks he was seen drawing dots on almost any flat surface at 8 Ball Camper Conversions, trying to work out how to get a truly random pattern. Odd as it may sound, the worst possible look was obtained by being completely random, as there would be areas with too many dots and other areas with none at all. But after a bit of trial and error he managed to work out a random pattern which looked good.

Next came the fibre optics themselves. First he tried a fairly mainstream fibre optic driver complete with 200 strands of tiny fibres. Helped by our apprentice, he drilled 200 tiny holes in a board and carefully threaded the fibres through. It looked like a cross between spaghetti and a spider’s web after an hour or two, but he assured us that it would look great in the end. But to be honest he was only half right; the finished board lit up fine and the random pattern looked good. However the resulting starlight effect was more like a scene from a Star wars action sequence rather than being the gentle twinkle of the night sky. You half expected Darth Vader to knock on the van door, if you hadn’t had an epileptic seizure first, such was the frantic flashing.

Never one to give up, Colin searched around for a different driver that would twinkle more and flash less. Eventually he hit the jackpot and the first 8 Ball Camper conversions Starlight ceiling was fitted into the bed base of the customer’s T6 van and it looked great. In fact it looked so good that a friend of ours had one put into his new T6 a few weeks ago too. It’s been a massive hit with the family and apparently his famously lively kids will now happily settle down and watch the lights twinkle as they drift off to sleep.

This leads us to our latest customer, who picked up on the idea and took it one stage further. “I’d like a starlight ceiling to remind me of a really special time. Can I have the night sky over Naples please?”

So the customer researched the sky, finding the exact view of the constellation they wanted and sent over a photo. We then had the photo enlarged onto a giant vinyl sheet and Colin set to work transferring this onto the bed board.

Using the vinyl as a template, he started with the biggest stars and for each one he drilled a tiny hole in the bed board and fed through an individual strand from the fibre optic bundle. Next he did the medium sized starts and finally the smallest, until he’d used up all 200 strands. Each strand was taken from a different part of the bundle, so that any two stars next to each other were likely to twinkle at a different time and in a different colour. Its job done, the vinyl sheet was then discarded leaving just the dark blue bed board.

As you can see from the photo, the strands spread out like a fan from the bundle and Alex can be seen feeding individual strands through to the underside, with them temporarily held in place with masking tape. Once completed this was then covered with ply before the mattress ended up on top. 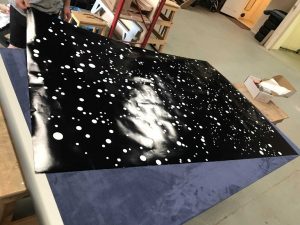 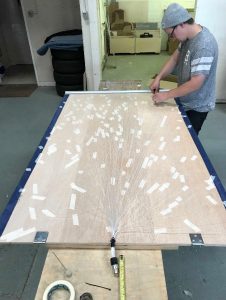 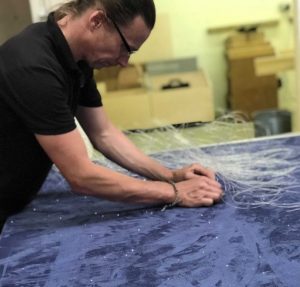 Next Colin ‘shaved’ each strand on the underside of the board, so that they couldn’t really be seen when not turned on; hence you don’t even realise they are there.

And then with the flick of a switch the stars above Naples suddenly appear. Magic.