We are often asked “Which poptop roof is the best for a VW t5 or T6?” and to be honest that’s a matter of opinion. As we only fit TUV approved roofs, that narrows the field somewhat; but to be in a better position to advise customers, we decided to build 3 vans with 3 different TUV approved roofs. This has allowed us to offer an objective comparison on both how easy they are to fit and more importantly for customers, what they are actually like.

So here we go.

We will start with Austops, which is a British company based near Selby in Yorkshire. We fitted a white SWB T6 with a standard Austops scissor hinge roof.

How did it arrive?
A key feature of an Austops roof is that non-metallic colours can be colour coded to your van in the gel coat at the production stage. This saves the time and expense of having to get your roof painted before it’s fitted. Sadly this option isn’t possible for metallic finishes, so if you want a metallic colour the roof must be painted first. However Austops will get this done for you in advance, so that when your roof arrives it is immediately ready for fitting, which is a great help in comparison to other manufacturers.

The installation
The Austops roof has a frame made up of a number of component parts. There is a well-engineered powder coated front frame that is installed above the front headlining, a powder coated rear frame and two galvanised side frames that are fitted during installation. This means that there is slightly less manhandling of heavy frames in comparison to other roofs, as you do one piece at a time rather than a whole frame assembly in one go. There is also no nose cone to fit, so that’s one less job to worry about too.

What does it look like?
In a word; slim. The roof adds very little to the overall height of the vehicle, which means that on our van it still fits under a 2 metre height barrier. I was at IKEA last week and unlike almost every other camper there, ours could use the multi-story car park rather than having to use the commercial vehicle park. Being under 2m is a massive advantage when on holiday too, as you should be able to get into most supermarket car parks rather than having to park some distance away out on the street.

How does it operate?
To raise the roof you loosen the long Austops straps and push, the gas struts do the rest. You then need to reach in and unclip a cross elastic before you push the bed up. This is easy enough, but if you have a twin front passenger seat with no seat swivel, you do need to be something of a contortionist to reach in. It’s far easier if there is only a single passenger seat, as you then have room to stand between the two front seats to turn round.

To lower the roof, you first lower the bed, replace the elastic and then pull down on the straps equally. One advantage of this roof is that you can pull it down a little at a time, allowing you to carefully fold the front window. Also, as there is no nose cone there is a lot of space in which to fold the window. This means fewer creases and ultimately a better look and longer service life I guess. Once the roof is down, there are no more clips or straps to mess about with and all you have to do is push the strap ends up out of the way.

What’s it like to live with?
The upper area around the frame comes untrimmed, so there is a bit of extra work to do here in comparison to other roofs. The upside is that once trimmed the finished roof feels like it’s a part of the conversion rather than being a large fibreglass tub which has been inserted into the van like some other roofs.
The bed board is 12mm birch ply, so it’s relatively light but it feels substantial. You don’t worry about it collapsing after eating a few too many pies.
The canvas is pretty much fully waterproof and it seems to cope well with British weather.
Cost
The Austops roof is very competitively priced and the fact that in a flat colour it can be colour coded to your van at no extra cost also saves you even more. We currently charge (for a SWB van) £2,300 + vat for a flat colour and £2,700 + vat for a metallic finish.

Warranty
The Austops roof comes with a 5 year manufacturer’s guarantee.

Pros:
It’s slim and our van fits under a 2m height barrier. The roof can be lowered a bit at a time, making folding the window much easier
It is very competitively priced

Cons:
It requires final trimming around the upper section of the frame once installed. You need to reach into roof space to attach the elastic cross strap
Not recommended for a roof rack

Next week is the turn of the Reimo V tech easy fit and finally the SCA roof will be the week after that, along with our conclusion as to which we think is the best. 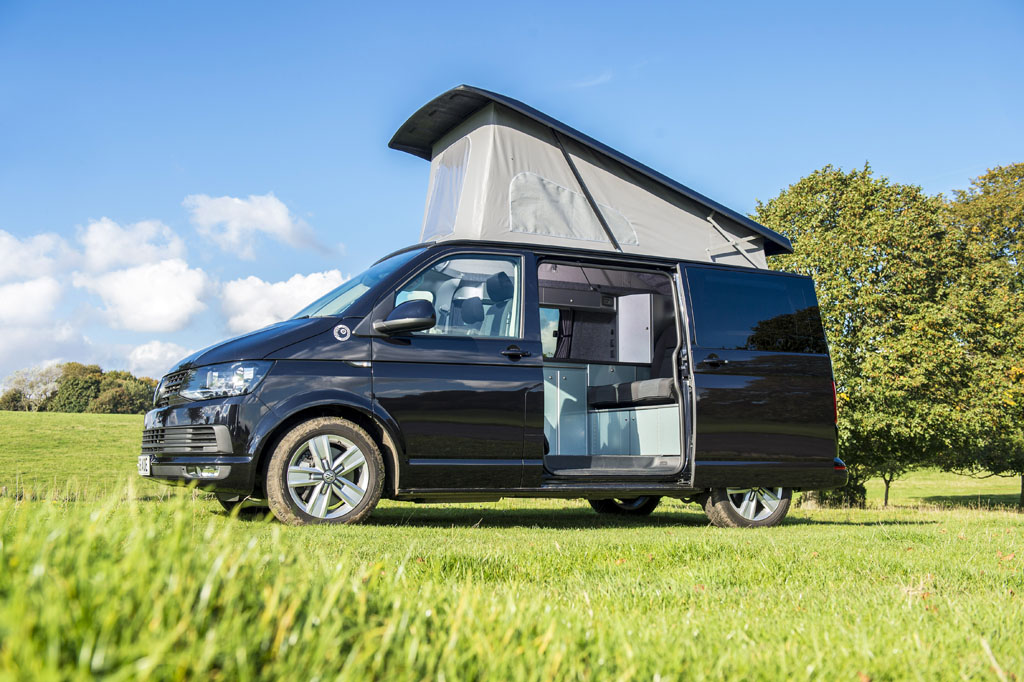