Having spent many great trips away with friends in their camper vans, I’ve always been tempted to buy one of my own. In years gone by I’ve spent a great deal of my time on flights and in airports, and this was normally my preferred method of transport. However, with the challenges 2020 has presented with Covid-19 and limited travel options, it accelerated the decision making process. So now I was ready to take the plunge in to my own camper van, but of it has to be a conversion that fits my needs and lifestyle.

When it comes to requirements, I have some specific ones for it to suit my lifestyle. In the summer, I spend a lot time following my passions for wakeboarding, wakesurfing and mountain biking around the UK but also a great deal of time abroad in countries such as France. So, any van needs to be able to cater for the safe and functional transit of bikes and boards while still providing a comfortable living space. A bike rack is an obvious option, but you don’t always want to leave big suspension and eye-catching bikes fastened to the back of a vehicle. This means that the bikes together with boards must be stored in the vehicle itself. Just to make it a little more complicated, I also work in technology.  The world of tech presents some challenging working hours, including the constant need to be able to assist my customers, often at the drop of a hat! Therefore no trip away is without the need to spend a few hours on my laptop, meaning I also require a workspace.

So, plenty of requirements but of course they’re all limited by the space that a van has to offer. I wondered how and indeed if, it might actually be possible to bring all of my requirements to life in a camper van.

I decided to take the next step and bought my van, a VW T6 Highline. I opted for the long wheelbase version for that valuable extra space. For the first few months I used it as a Kombi. It served it’s purpose for a couple of trips but it soon became apparent what was missing, and that a camper conversion was needed to make it truly functional and practical.

After spending a great deal of time looking at the various camper conversion companies in the UK (there are so many!), I began to explore my requirements in more detail with the team at 8 Ball Camper Conversions. This was partly due to the quality of their fantastic craftsmanship and excellent reviews but also because their team have a similar interests when it comes to adventure sports and travel.

Colin at 8 Ball Camper Conversions spent a great deal of time listening to and considering my requirements, specifically the need for a locker to store bikes and boards, but also to facilitate my remote working requirements whilst not diminishing the true essence of a camper van. The outcome of these discussions and Colin’s attention to detail confirmed that 8 Ball Camper Conversions was the right company to go with for my camper conversion.

The conversion itself would be something a little different to their normal work but the team really “got it” when they thought about the practicalities of transporting their own bikes and boards. Not only that, but they also took me through all of the various colour options (there’s a lot!) and helped me select something that just felt right. While the conversion is of course to serve my lifestyle needs, I also wanted to ensure that it was practical enough to sell, whenever that day may come.

With all the above carefully considered and agreed, we’ve pressed play on the conversion! To say I am excited would be an understatement. Now just to wait for the second national lockdown to end and the conversion to be completed before I put pen to paper again for part two of this blog, showing the camper van in use. 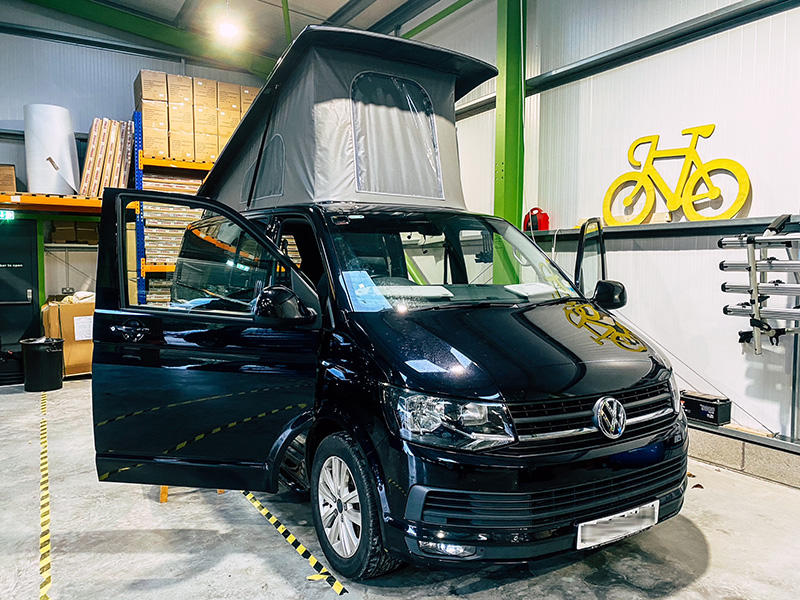