Scouting for a T5

Last week saw 8 Ball Camper Conversions helping out the local scouts and Neil finally discovered the benefits of a VW campervan. He used the T5 hire van as he went up to North Yorkshire to sit around in the middle of nowhere.

Once upon a time…

Colin was a scout, Mike was a scout and Neil was a scout. And scouts sleep in tents; everyone knows that. Then they grew up, got their driving licences and soon they had lots of hobbies between them; from skiing and snowboarding, to motocross, off road driving, wakeboarding, sailing and generally having fun in the great outdoors.

Almost every weekend they would be away. Colin and Mike had cars and used static caravans (Colin being the one who was most fashion conscious called his an ’American Trailer’). And Neil, apparently unaware of discomfort had an old Landrover and a tent.

Then Colin and Mike discovered the versatility of VW Transporter campervans. They found them to be so good that before long they started a business building them. And Neil stuck with tents, as by then he was living far far away where the sun shone and the sky was blue.

Then one day Neil decided to come home to the UK. Being the oldest of the three, he was a stubborn chap and he insisted on sticking with using his tent, whilst Colin and Mike smiled a wry smile and continued using their T5 camper vans.

Then it got cold and wet and Neil didn’t much like tents any more. Secretly he wanted a nice soft bed, a comfy seat to sit on whilst he made a cup of tea and room to stand up. But he was too stubborn to admit it and for months he crashed and banged around the countryside in his old Landrover with his leaky tent and worn out sleeping bag. Then, when he could take the misery no more, he would book into a hotel, before going back to the tent when he saw the bill!

Then he started working with his friends at 8 Ball Camper Conversions. Every day he saw campervans and he met lots of people who loved them. In fact some of them loved their vans so much they gave them names. He thought this was very odd (even though he’d named some of his own Landrovers over the years…that was different).

Then the local scouts needed some help getting their kit up to a walking competition. Neil was going anyway as he’d volunteered to help out and he was bracing himself for sitting in his little tent for hours on end on a windswept hillside manning a checkpoint.

“Why don’t you take the hire van Neil?” said Colin and Mike together.

Neil frowned. Secretly he loved the idea, but could he admit it? Then he looked at the weather forecast; ‘cool wind, rain and cloudy’. Brrrr he thought. His tent leaked and if he sat for hours in his Landrover (which leaked almost as much as the tent), he’d never be able to walk again.

And so last weekend, filled to the roof with the scout’s kit, he set off for North Yorkshire in an 8 Ball Campervan. His first proper trip out in one.

Over the 2 day event he spent many hours sitting at checkpoints. He made cups of tea, cooked bacon sandwiches, slept on a comfy bed under a snuggly duvet and generally had a very comfy time. He was joined at the checkpoints by various other people during the event and no matter what they drove; they all seemed to end up in the campervan eventually.

So maybe, just maybe, Neil has softened. As you’ll see from the pictures, a VW campervan makes a big difference.

Neil having a civilised breakfast with the 8 Ball hire van 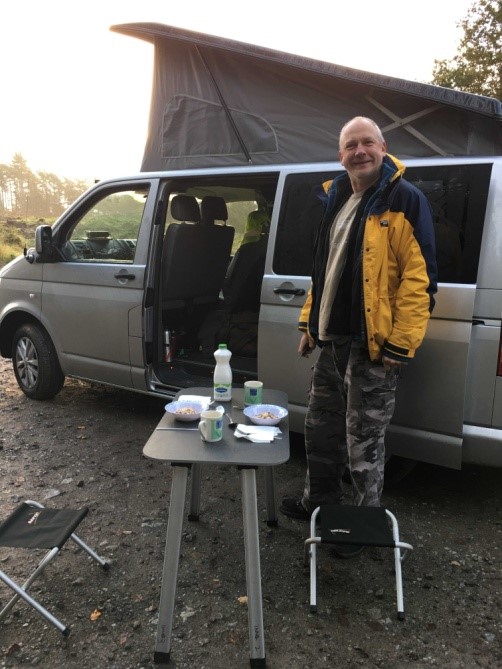 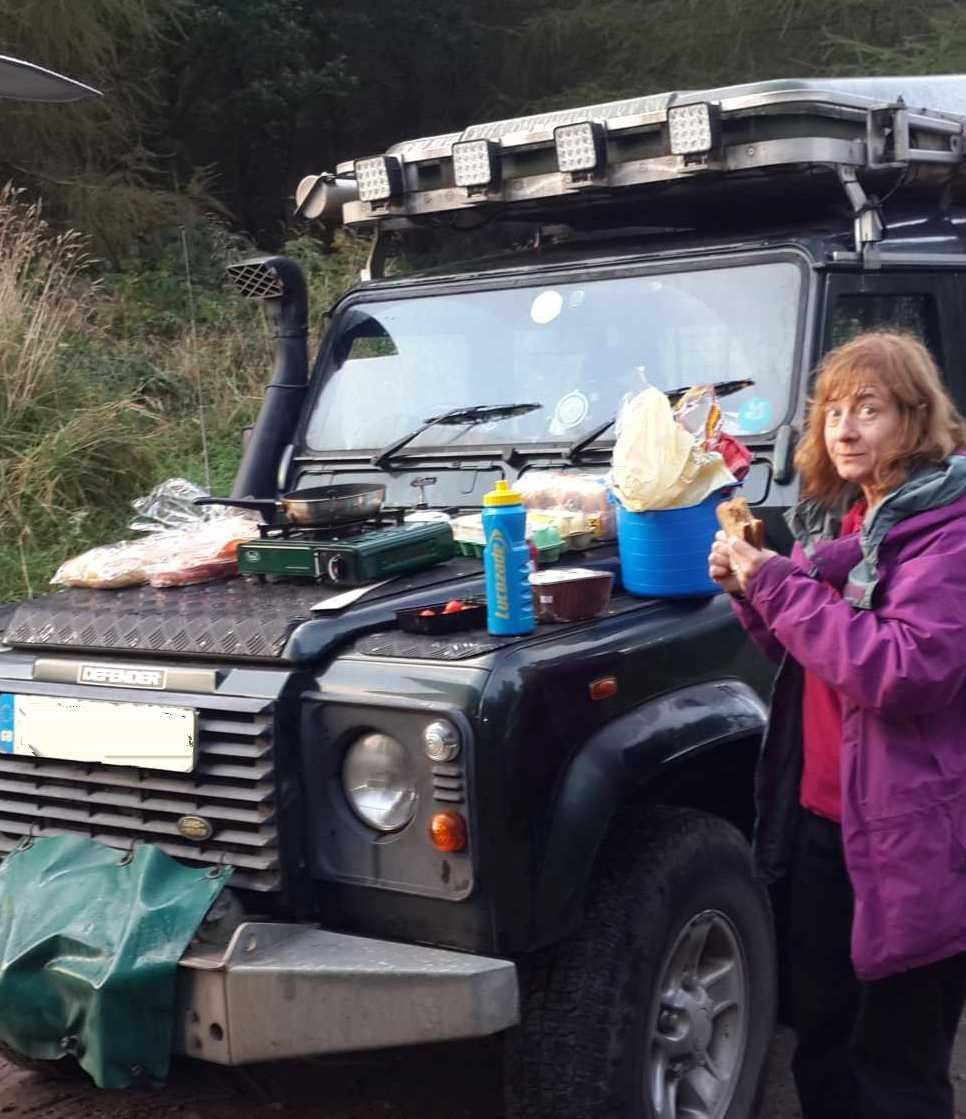