For years I’ve thought that the dashboard on VW T5 and T6 Transporter vans let the side down. This was partly because I banged my knees on it as a passenger in a T5 (I am very tall and my legs make most trousers look like shorts), but mostly because it seemed to be an enormous waste of space. I know VW had to hide air bags, heater controls, wiring and all sorts of gubbins behind it; but why oh why were there so few places to store stuff? I think the T6 dash is better than the T5, but even so, there had to be more space available with a bit more thought.

Perhaps they’ve now cracked it, as at last VW have decided to improve the dash on the T6 and we recently took delivery of a brand new Acapulco blue T6 Combi with the fancy new ‘comfort dash’. The van was our test bed for a new design of interior which kept the versatility of the combi van, but with an Austops roof and removable storage units. We showed the van at the Lincoln Motorhome Show last month and it gained a lot of interest, as this particular conversion offers a camper that can still be a van too…clever eh

Then a customer came along last week looking for a new or almost new van but with a full conversion with a fixed cupboard system and RIB seat. As a result it’s being re-trimmed as I write and is due for delivery to its new owners in a few weeks’ time.  So if you own a Combi van and you are looking for a bolt in camper interior, give us a call, as we have one in stock.

Anyway, back to the dashboard! It isn’t a cheap option, not least as it is only available on the California itself (RRP of over £60,000 if you go for a decent one) and as an option on the Combi van. At the present time VW won’t sell you a standard T6 transporter with the comfort dash. So if you want a conversion with one, then the only option is to pay the premium for a Combi van and then work from there. Effectively making it a £4,000 upgrade!!

However, it is brilliant. Much more storage than before, cupholders in a sensible place and it is colour coded to the van, giving it a really smart modern look. The central storage compartment is even linked into the AC, so it will chill what is in there…great for the sandwiches, but sadly not big enough for a bottle of wine…but then the van is being converted and that means it will have a large 50 litre compressor fridge anyway.

Will the ‘Comfort Dash’ become an option on all T6s? I hope so, as it really is so much more useful. I guess the painted surfaces may be susceptible to scratching if builders put their muddy feet on the dashboard, but for most of us, that shouldn’t be a problem. As you can see from the photos, there are lots of openings for a conveyor belt of maps, pens, sandwiches, sweets, first aid kit, cuddly toy, his and hers matching bath robes, fondue set…..(Sorry I’m going off track as someone mentioned that the Generation Game may be coming back on TV).

Of course the problem with selling the blue Combi is that yet again we have no van of our own to convert and we’ve found ourselves looking for a replacement. Never fear though, we’ve come up trumps with a ‘67 plate T6 Transporter 204PS 4 Motion with DSG gearbox and Highline specification in Starlight blue metallic. It looks fantastic and is likely to be converted in the near future. So if you’re in the market for a really special van then give us a call. 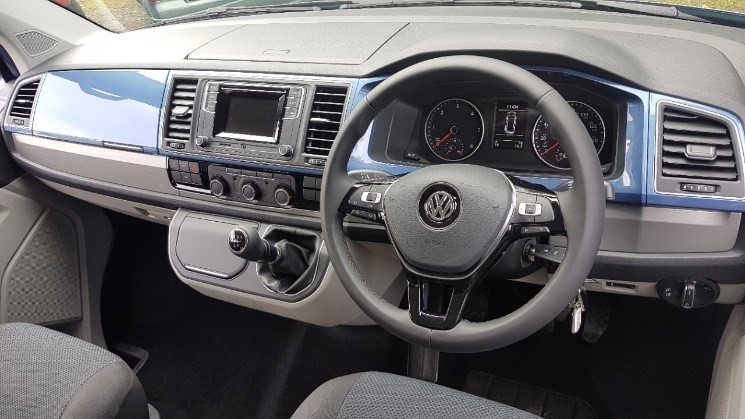 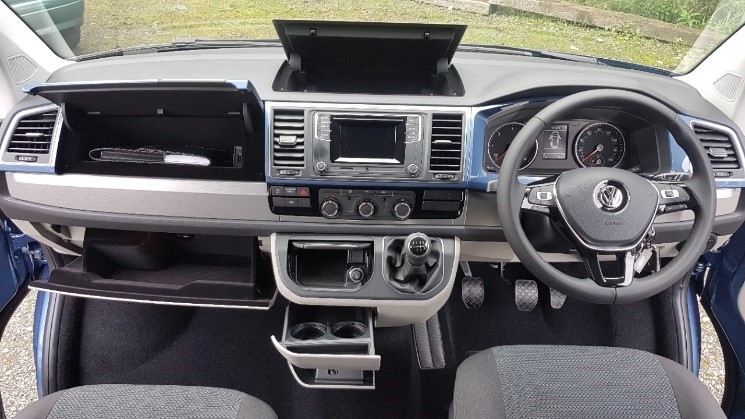